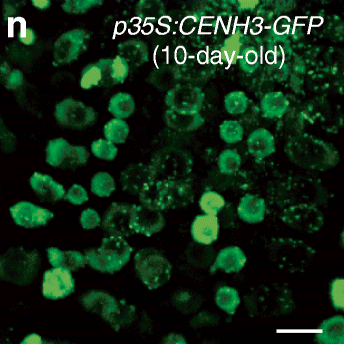 Background: Plant cell walls are mainly composed of polysaccharides such as cellulose and callose. Callose exists ata very low level in the cell wall; however, it plays critical roles at different stages of plant development as well as indefence against unfavorable conditions. Callose is accumulated at the cell plate, at plasmodesmata and in male andfemale gametophytes. Despite the important roles of callose in plants, the mechanisms of its synthesis andregulatory properties are not well understood.

Results: CALLOSE SYNTHASE (CALS) genes, also known as GLUCAN SYNTHASE-LIKE (GSL), comprise a family of 12members in Arabidopsis thaliana. Here, we describe a new allele of GSL8 (named essp8) that exhibits pleiotropicseedling defects. Reduction of callose deposition at the cell plates and plasmodesmata in essp8 leads to ectopicendomitosis and an increase in the size exclusion limit of plasmodesmata during early seedling development. Movementof two non-cell-autonomous factors, SHORT ROOT and microRNA165/6, both required for root radial patterning duringembryonic root development, are dysregulated in the primary root of essp8. This observation provides evidence for amolecular mechanism explaining the gsl8 root phenotype. We demonstrated that GSL8 interacts with PLASMODESMATALOCALIZED PROTEIN 5, a β-1,3-glucanase, and GSL10. We propose that they all might be part of a putative callosesynthase complex, allowing a concerted regulation of callose deposition at plasmodesmata.

Conclusion: Analysis of a novel mutant allele of GSL8 reveals that GSL8 is a key player in early seedling development inArabidopsis. GSL8 is required for maintaining the basic ploidy level and regulating the symplastic trafficking. Callosedeposition at plasmodesmata is highly regulated and occurs through interaction of different components, likely to beincorporated into a callose biosynthesis complex. We are providing new evidence supporting an earlier hypothesis thatGSL8 might have regulatory roles apart from its enzymatic function in plasmodesmata regulation.