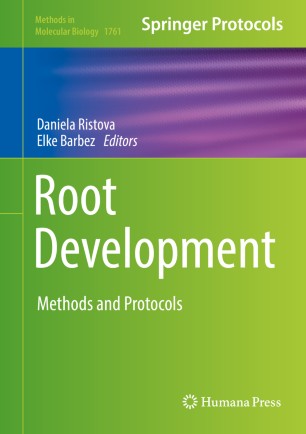 Adventitious roots (AR) are de novo formed roots that emerge from any part of the plant or from callus in
tissue culture, except root tissue. The plant tissue origin and the method by which they are induced
determine the physiological properties of emerged ARs. Hence, a standard method encompassing all
types of AR does not exist. Here we describe a method for the induction and analysis of AR that emerge
from the etiolated hypocotyl of dicot plants. The hypocotyl is formed during embryogenesis and shows a
determined developmental pattern which usually does not involve AR formation. However, the hypocotyl
shows propensity to form de novo roots under specific circumstances such as removal of the root system,
high humidity or flooding, or during de-etiolation. The hypocotyl AR emerge from a pericycle-like cell layer
surrounding the vascular tissue of the central cylinder, which is reminiscent to the developmental program
of lateral roots. Here we propose an easy protocol for in vitro hypocotyl AR induction from etiolated
Arabidopsis seedlings.